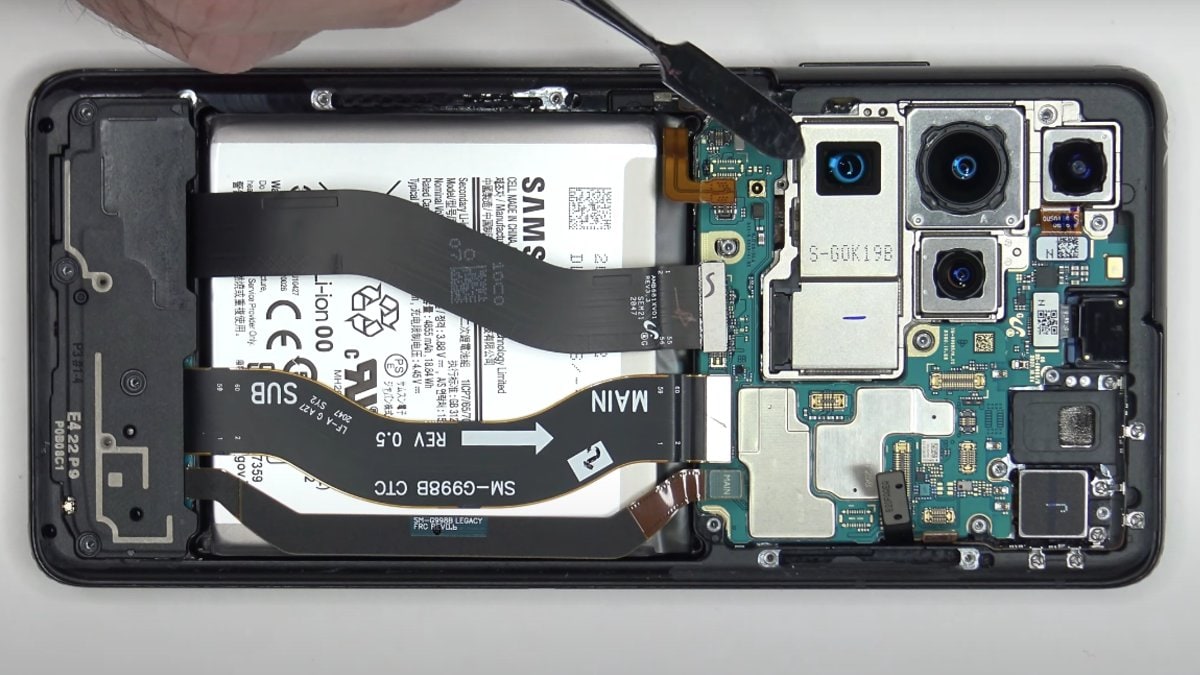 The nearly nine-minute teardown video posted by YouTube channel PBKreviews begins with removing the back of Samsung Galaxy S21 Ultra by applying some heat. The back features a glass construction, though the camera housing is made of metal.

Removing the back panel of Samsung Galaxy S21 Ultra is just identical to how one can remove the back of the regular Galaxy S21, that also received a teardown treatment by the same YouTube channel recently. However, there are some major differences between both phones in terms of internals and their assembly.

In comparison with the vanilla Galaxy S21, Samsung Galaxy S21 Ultra also lacks a detachable screen connector cable. The phone instead has a cable fixed with the screen.

“If you need to replace the screen, you would have to take the backplate off, remove the top cover, and disconnect the screen cable from the main board,” the narrator in the teardown video said. “And then you’d remove the speaker assembly on the bottom. You’d heat up the front of the phone where the screen is, and you pry your old screen off.”

The battery of Samsung Galaxy S21 Ultra is also fixed with adhesive and doesn’t include any pull tabs to help you remove the battery pack.

“This battery is really difficult to pry off,” the narrator said. “I had to use some isopropyl alcohol to loosen up the adhesive underneath so I could pry it off.”

Samsung appears to have deployed graphite on the NFC antennae and motherboard to provide better heat dissipation. The Exynos 2100 processor and RAM also have a thermal paste on top, as per the video.

What will be the most exciting tech launch of 2021? We discussed this on Orbital, our weekly technology podcast, which you can subscribe to via Apple Podcasts, Google Podcasts, or RSS, download the episode, or just hit the play button below.