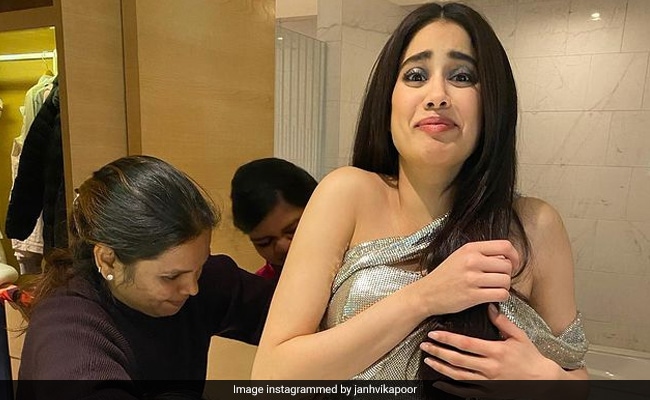 Much like other members of her family, Janhvi Kapoor has never shied away from showing her foodie side on social media. Even in her interviews, Janhvi loves to talk about food, and everything new she has tried on her travels and shoots. On Monday evening, Janhvi decided to take a hilarious dig on herself. She shared a picture of her chomping on her plate of white sauce spaghetti, while getting her hair and makeup done. She followed it up with a picture of her struggling to fit into a dress due to all the carbo-load earlier. “Before and after”, she captioned the image.

(Also Read: Ziva Dhoni Handpicks Veggies For Dinner; Guess What All Are There In Her Bucket)

Since Janhvi is one of the fittest actors of this generation of Bollywood, it is hard to believe that she can have trouble fitting into any dress in this world, but it is sure a delight to see an actress who knows how to indulge and not take herself so seriously while at it.

Janhvi Kapoor’s was last seen in ‘Gunjan Saxena – The Kargil Girl’ where she portrayed the role of Flight Lieutenant Gunjan Saxena, who played a pivotal role in the Kargil role. Despite the controversies surrounding the film, Janhvi’s performance was overall well-received by the critics. Janhvi has also been signed as the lead in ‘Dostana 2’ where she would be sharing screen space with Kartik Aaryan for the first time. The Dharma production may release next year. Janhvi was shooting for ‘Good Luck Jerry’ in Patiala, when her shooting was briefly disrupted by protesting farmers.

About Sushmita SenguptaSharing a strong penchant for food, Sushmita loves all things good, cheesy and greasy. Her other favourite pastime activities other than discussing food includes, reading, watching movies and binge-watching TV shows.