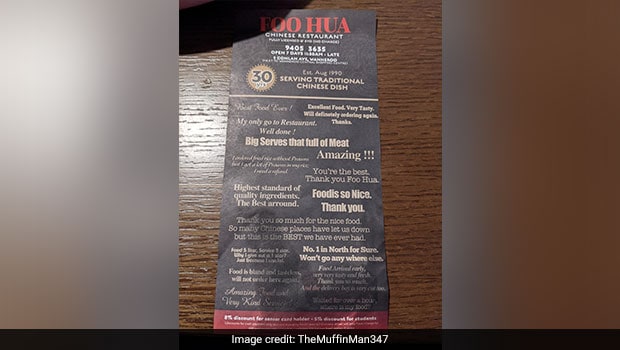 Any publicity is good publicity. Guess we saw it coming true for the first time when this restaurant became even more popular after publicising its negative reviews. Foo Hua, a Chinese restaurant in Wanneroo, Perth, posted its flyer online that contained many reviews from customers – both positive and negative. Maybe it was the honesty displayed by the restaurant or the sheer novelty of the marketing idea, it happened to win people’s hearts. The brutally honest flyer is making waves on the internet inspiring other restaurants to imbibe such transparency .

While a customer of the restaurant called it their ‘only go-to restaurant’, another snubbed its food as ‘bland and tasteless’. The interesting flyer with varied comments definitely makes for an amusing read. A picture of the flyers was posted on the Reddit group “mildlyinteresting”.

Chinese restaurant included negative reviews on their flyer from r/mildlyinteresting

Here are some of the comments that filled up the now-viral flyer.

“I ordered fried rice without prawns but I got a lot of prawns in my rice. I need a refund”

“Food is bland and tasteless, will not order here again”

“Waited for over an hour, where is my food?”

(Also Read: Viral Post Makes People Order Food Online For Others; See How It All Began)

However, there were quite a few positive reviews too:

“Food arrived early. Very tasty and fresh. Thank you so much. And the delivery boy is cute too,’ they wrote.

“Thank you so much for the nice food. So many Chinese places have let us down but this is the BEST we have ever had.”

Needless to say, the Reddit post with the flyer picture went viral and made it way to the front page of Reddit,  clocking in more than 50,000 upvotes and  about 1.2k comments.

“I can appreciate honesty and transparency. I’d at least give it a try to find out for myself”

“They aren’t scared of their haters”
‘Foo Hua does delicious food. It’s my go to Chinese restaurant!’

“Reminds me of Friends when Joey got bad reviews, but thought they were complimenting him”

About Neha GroverLove for reading roused her writing instincts. Neha is guilty of having a deep-set fixation with anything caffeinated. When she is not pouring out her nest of thoughts onto the screen, you can see her reading while sipping on coffee.